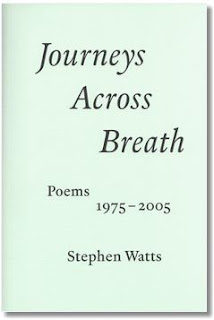 the seamless and the gap

In his afterword to this collection of all of Stephen Watts’ published works between 1975 and 2005, a four-hundred page volume which includes a number of previously unpublished pieces, Gareth Evans highlights that which is constant throughout: ‘the undeniable liveness, the fact of the happening’. Evans also points to the remarkable manner of Watts’ public reading of his poetry which emphasises some of the deep qualities buried within the work:

His passionate delivery – the rhythmic roll of the speaking voice in lines both rigorously constructed and free-ranging at once – contrasts unforgettably with his sitting or standing quite still.

What is clear from both these statements is that experience is embodied in both the event of a reading and the book itself: ‘Writing is speaking is reading is breathing – literally’.

The early thirty-line poem ‘Brick Lane’ from the 1990 volume The Lava’s Curl (Grimaldi Press) contains one sentence that moves down the page as it offers the reader a saunter down an East End street on the edge of Bethnal Green. The small journey opens with a certain sense of ease at the very particular time of the day:

Whoever has walked slowly down Brick Lane
in the darkening air and a stiff little
rain,
past the curry house with lascivious frescoes,
past the casual Sylheti sweet-shops and cafés
and the Huguenot silk articles of Fournier Street,
and the mosque that before was a synagogue
and before that a chapel…

That word ‘slowly’ is placed with care in the middle of the opening line to set the tone’s pace for a movement which is going to offer glances at those things which will be passed by. The precision of ‘darkening’ emphasises the slow passing of time and the movement itself is held within the dual meanings of the word ‘past’: as we move along the road we are moving through time as well as space. The historical development of an area is caught with the repetition of the word ‘and’ to the extent that one might be prompted to recall what Charles Olson had referred to as the present standing upon the roots of the past as in his early poem ‘These Days’ from January 1950:

whatever you have to say, leave

the roots on, let them

where they come from

As the Brick Lane amble continues the reader is drawn into a world of haunting presences:

whoever has walked down that darkening tunnel
of rich history
from Bethnal Green to Osborne Street at Aldgate,
past the sweat-shops at night and imams with
hennaed hair,
and recalls the beigel-sellers on the pavements,
windows candled to Friday night,
would know this street is a seamless cloth, this
city, these people,
and would not suffocate ever from formlessness
or abrupted memory…

The repetition of ‘darkening’ accompanies not only the immediate time of evening but also the subterranean movement back in time as the mind recollects what has been shifting and changing throughout the road’s history. The seamlessness of the cloth upon which the narrative of passing time is woven permits ‘rich history’ to appear ‘present before us, / laid out like a cloth – a cloth for the wearing –’ and as one is guided down this pathway of Brick Lane, ‘from end / to seamless end’ one casts a glance back to the epigraph at the beginning of the poem which refers to Altab Ali, the textile worker from Bangladesh who had been stabbed to death in May 1978 in what was then St. Mary’s Park before its name was changed to commemorate that racial murder of the 25 year old. At the entrance to the park an arch was later created by David Petersen to incorporate a complex Bengali-style pattern intended to show the merging of different cultures in east London and along the path down the centre of the park letters spell out ‘The shade of my tree is offered to those who come and go fleetingly’, a fragment of a poem by Rabindranath Tagore.

Gareth Evans refers to Watts’ poetry as being ‘an encounter with the undeniably real in time and space’ whilst also recognising that each poem is ‘a living thing – that is to say, a breathing thing’. And that too prompts one to recall what Olson had said in his early essay ‘Projective Verse’ which was published in Poetry New York 3 in the same year as ‘These Days’:

Olson insisted upon ‘a part that breath plays in verse which has not (due, I think, to the smothering of the power of the line by too set a concept of foot) has not been sufficiently observed or practiced, but which has to be if verse is to advance to its proper force and place in the day, now, and ahead’ and it is perhaps no mere coincidence that the title of Stephen Watts chose for his collection of individual volumes should be Journeys Across Breath.

In Section VIII of the book, ‘Strands, Clusters…’ Watts presents the reader with Four Essays one of which is titled ‘Some Thoughts On A Physics of Poetry’ which opens with the unblinking statement ‘Poetry is akin to energy and breath’:

Poetry is the breath of energy, it is energy and breath together.

In this, poetry is related to physics, both are marked by energy. Poetry
is not so much to do with language – a ‘fault’ of the ‘language poets’
– as with physics.

Poetry is a mathematics of flowers: all three share the existence of
structures in the world, structures that have been in existence for
many millions of years.

An earlier section of Four Essays had offered us a definition of algebra as the science of ‘restoring what is missing and equating like with like’. It takes its name from the Arabic ‘al-jabr’ and becomes in poetry ‘the most effective method of progressing from point ‘a’ to / point ‘b’ that both succinctly expresses the relation between ‘a’ and ‘b’ /  and that also most richly relates the context of the wider universe / where points ‘a’ and ‘b’ exist’. For Stephen Watts poetry opens up in language – in the way we say things – ‘what appeared not to be there before’ and perhaps as an echo of Olson’s ‘The Moebius Strip’ (published in y & x in 1948 to accompany the Buchenwald drawings of Corrado Cagli) it offers ‘materials and the weights of pain / their harmony’.

Also in Section VIII of Journeys Across Breath there is a collection of Siberian Pieces where Watts writes about the Hungarian artist Lászlo Mészáros who had been arrested in 1938 and executed in the same year. Watts quotes the artist’s daughter who went on to become one of the foremost Hungarian film-makers having made the trilogy ‘Diary For My Children’ (1982), ‘Diary For My Loves’ (1987) and ‘Diary For My Father And Mother’ (1990)

‘His art died in 1938 when they took him away. I do not remember much of him…if we do not preserve his memory, his life and art will become part of our forgotten past.’

When Gareth Evans wrote that the poetry of Stephen Watts is both ‘intensely local’ and ‘utterly international’ he was writing about a poet of today whose oeuvre reflects a deeply moving understanding of that moebius strip: our searching glances at the world around us reveal understandings that we had not possessed before.